Knowing how to love yourself can feel impossible. Even more so when you hate the crumb-tolerant doormat you’ve become – to fake friends, selfish partners, your boss, toxic family members, and most tragically… the cynical audience in your own head.

When I was in sixth grade, I signed my own yearbook in four different types of handwriting. I wrote notes to myself saying how much fun and amazing I was. I even included inside jokes and went on about sleepovers and fun memories that never existed. These notes were supposed to be from my really good/cool friends that went to another school.

The most heartbreaking was writing a note where I pretended to be a popular boy who wanted to date me.

Why did I do this?

Because it was the only way I could emotionally survive the reality of absolutely no one wanting me.

At that young age, lies and creativity were the only way I could cope with my shame. The anxiety I would get when I had to ask one of my classmates to sign a yearbook that was totally blank (except for a few signatures and notes from teachers) was too much. All I ever wanted was to be wanted, accepted beautiful, cool, and enough. Five things that I never fully felt at home.

This behavior continued in many different ways as I got older. And because deep down, I knew how fake I was, I lost all respect for myself (which eventually, led to self-hate).

As long as you lack self-respect, you will never have respect for anyone who genuinely respects you – no matter how much you claim to want and deserve it.

We like to think that a lack of self-respect can coexist with, and even be extinguished by, an abundance of true love from someone else but it can’t.

If you don’t respect yourself, getting genuine love from another person will never feel the way you’re convinced it should feel. It won’t feel nearly as valuable as getting disrespectful attention from people who are just as incapable of genuinely loving themselves.

Knowing how to love yourself is not hard.

Self-love is nothing more than consistently having your own back, by acknowledging the value that you have as a human being on this planet.

It’s about gaining confidence from your ability to act on healthy boundaries and enforce high standards.

It’s about understanding that anyone who makes you feel worthless does so because they cannot tap into their own.

If you find yourself always…

… and eggshell walking in your relationships, it’s not because you’re “unlucky in love.” it is 100% because you have a lack of self-love.

If you are in any kind of relationship where you are not getting the respect you deserve (but continue to stay and fight for your love, compete for his/her attention, and have to fact check at every turn)… this is not admirable. It’s a symptom of an extreme lack of self-love.

If you care too much about what other people think and internalize the behavior of others… you don’t know how to love yourself.

If you’ve finally gotten out of a toxic relationship where you were devalued, cheated on, and disrespected but still treat yourself poorly and miss him/her on the daily… it’s because you don’t love yourself.

If you have a hard time saying “no” and derive a sense of value from people-pleasing, you don’t know how to love yourself.

You could have the Dalai Lama visit you every morning and drink water that was blessed by the Pope and fart clouds of peace and as great as all of that is… It wouldn’t make you LOVE yourself.

You may feel cool for a hot minute, but it would never last and ultimately, you would end up hating yourself even more. Inauthenticity breeds self-hate.

There are so many resources out there and practices that will lead you in the right direction, but if you don’t commit to having your own back, you are single-handedly robbing yourself of your own destiny – not your parents, not the kids that bullied you as a child, not your exes, not your teacher or your coach or your boss or your fake friends. YOU are the one dimming your own light – not them. They only have as much power as you choose to give them.

If you already knew all of this and still don’t feel like you can ever love yourself, guess what this means?

It means that your comfort zone is fear.

How am I so sure of this? Because it has been my reality for much longer than it hasn’t.

I became a victim to these issues. And the only hope that a victim has is being rescued. So, I looked to friends, family, and men to “rescue” me in the form of seeing my worth enough to change their hurtful behavior.

It wasn’t them that needed to change though. It was me.

The moment I made a commitment to treat myself no better than I had those made up friends in my yearbook treat me (and no better than I was treating people who were never worthy of my time, to begin with), my life transformed. I used my fear as fuel instead of allowing it to keep me in an emotional time zone that I was never born to acclimate to.

I want you to find a photo of yourself when you are under five years old. Find one where you are at your happiest. This is mine (I had just spotted Minnie Mouse): 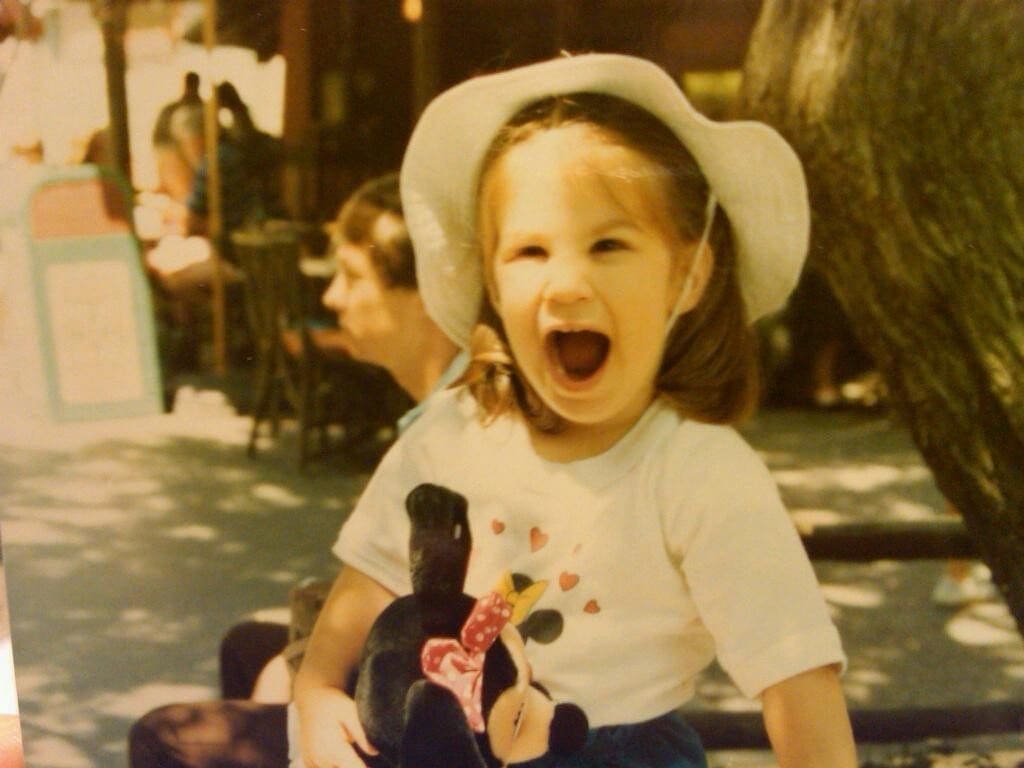 Now, take a good look at that little one.

Take a photo of him/her and make it the screen saver and wallpaper on your phone.

I want you to imagine this: If you were walking down the street and you saw someone beating the crap out of that innocent kid in the photo that just wanted to be liked, accepted, and loved, what would you do?

I am positive you would intervene and rescue the kid.

Guess what? You’re still that same kid. That’s YOU.

And you are not only beating the daylights out of that kid, but you are letting everyone else have a go too.

Every time you have a negative thought about who you are and blame yourself on account of the hurtful actions of toxic people, take a look at that photograph. If you can’t stick up for the grown adult that you are, you can most definitely, stick up for the child in that photo.

Soon, you’ll start to love yourself. And eventually, you will attract people who value that little one as much as you do because they too, were able to find a way not out, but back to that child who so desperately needed them.

Today, I am everything that that scared, sixth-grade girl signing her yearbooks needed.

And because I’ve learned to be there for her, I’ve been able to see the brilliance in how she decided to cope – instead of continuing to be ashamed of it.

I decided to build a vehicle for that creativity (this blog and business of mine that I quite literally, live for. I live to help people out of pain, ambiguity, and suffering that I know all too well).

And that’s when I stopped adding to a relational resume that only mattered to people who were just as superficial because they hated themselves just as much.

+ If you need further and more personalized help, please look into working with me here.

HOW TO STOP CARING ABOUT WHAT OTHER PEOPLE THINK
August 31, 2022

HOW TO ENJOY YOUR OWN COMPANY WHEN YOU FEEL LIKE YOU HAVE NO ONE
September 14, 2021

HOW TO BECOME MORE THICK SKINNED & EMOTIONALLY INDEPENDENT
May 12, 2021

Natasha Adamo is a #1 bestselling author, high-performance, self-help and relationship coach, as well as a speaker and blogger with over two and a half million readers. She currently coaches clients in-person and telephonically in thirty-one countries around the world. Win Your Breakup is her first book.